Blogs of the FEZ research group

A Story of Snakes and Sight (don’t we research invertebrates)?

Last week marked the release of a new paper by one member of the Invertomics group, James Fleming, in a field that seems quite far apart from the mission of the lab! “Eye-transcriptome and genome-wide sequencing for Scolecophidia: implications for inferring the visual system of the ancestral snake” was part of a long term collaboration including James, David Gower at the UK’s Natural History Museum (the first author of the study), and a great number of other researchers from across Europe: Davide Pisani (University of Bristol), Freek Vonk (Naturalis Biodiversity Centre in Leiden), Harald Kerkkamp, Christiaan Henkel and Michael Richardson (University of Leiden), Leo Peichl and Sonja Meimann (Goethe University in Frankfurt), Nicholas Casewell (Liverpool School of Tropical Medicine), Kate Sanders (University of Adelaide) and Bruno Simões (University of Plymouth).

This paper attempts to tackle one of the long-standing questions in snake evolution – what kind of environment did the ancestral snake live in, and what did they look like? Snakes appear to share the loss of two opsin genes – genes which help perceive specific wavelengths of light – across the group, which might mean that the loss took place in the ancestor of all snakes. This suggests that the snakes may have originated in a low-light environment, or under other conditions where light wasn’t important. But what were the conditions that might have enabled that loss? Was it undersea, or underground? In addition, there aren’t many genomes available for the earliest diverging group of snakes that are still around, called scolecophidians. This group of burrowing snakes includes the smallest snake known on the planet, the Barbados Threadsnake,  Leptotyphlops carlae (Pictured, picture by Blair Hedges Penn State University), which might reasonably be mistaken for an earthworm! 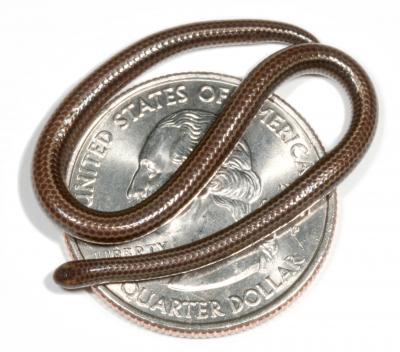 In order to find out more about what the earliest snakes might have seen, we sequenced the genome of a species of Anilos, a member of the scolecophidians. We looked for 41 genes associated with sight: some that help snakes see different colours or see at night; some that change the size of a snake’s pupil when a room gets brighter or darker; and others that help with a whole host of auxillary visual functions. We then looked for these same genes in 33 other reptiles – 17 snakes, 15 lizards and a tuatara. By comparing these genomes, we could work out which genes were lost completely, and, most importantly, when in the evolutionary history of reptiles that happened. Some of these genes are more closely associated with photopic vision (high light/day vision), and some with scotopic vision (low light/night vision), so if we saw more losses in the photopic genes across all our snakes compared to the scotopic genes, this meant that the ancestral snake might have lived in a dim environment (and so didn’t need all those photopic genes).

Finally, we looked at the immunohistochemistry of the eye of Anilos. This was a hands-on way of confirming some of the information we gleaned from the transcriptome. We used special serums of antibodies that only bound to the eye proteins we were interested in, and then special dyes that only dye those antibodies, which allowed us to see the proteins we were interested in more clearly under a microscope.

Overall, we found that Anilos, as we expected, had lost a lot of vision-related genes. More importantly, though, the majority of those genes were related to photopic vision. They had lost 9 out of the 14 photopic genes, but only 3 out of the 11 scotopic ones! This shows that this group has really adapted to their underground, burrowing lifestyle, living in dark environments. However, what we didn’t expect was that a lot of those gene losses were specific to just Anilos. Whilst all snakes showed the loss of some vision-related genes when compared to lizards, it wasn’t nearly as many as we expected. This suggests that the lifestyle of the ancestral snake probably didn’t resemble that of these burrowing scolecophidians like Anilos. If it did, we’d have seen more shared losses of photopic genes across the snakes, rather than an adaptation to burrowing in just this group.

Snakes might seem a million miles away from invertebrates, but James works within the Invertomics project as a phylogenetic researcher. His methods-based interests and training have led him across a wide range of animal groups, from tardigrades and jellyfish to snakes and now to worms! This is quite common for a lot of researchers who work with methods in biology, and if you’re interested in how things fit together rather than a specific group of living organisms, it can be a really fascinating career path.

This research is also a great example of how scientific papers are published, and the timescales that research sometimes takes. The section that James contributed to this paper was also a chapter of his PhD Thesis, completed and submitted in 2018! The first version of this paper was sent to a journal just before that. When all scientific paper are submitted to journals, they are sent out for “peer review” – to be looked over by other scientists in the field and assessed for quality. In this case, the reviewers wanted us to add more data to our study to make sure our conclusions were as sound as they could be.

Sometimes, making a good response to a review will take only a week to a month of extra work, but in this case, that process ended up taking us three years! In addition to improving the quality of the work in response to this review, we then went above and beyond and added whole new sections to the paper to make it as comprehensive and exciting as possible. Another round of reviews later, our paper was accepted by Genome Biology and Evolution in the form it is today.

Science can sometimes take a long time, but hopefully in this case the process is worthwhile. The evolution of vision in snakes is not something that many of us think about on a daily basis, but this collaboration has been fruitful, fun, and produced, hopefully, valuable insight into the evolutionary history of a group that is incredibly important to the world today!

We are the research group “Frontiers in Evolutionary Zoology” (FEZ) at the Natural History Museum of the University of Oslo. In this blog we write about ourselves, and our projects, research and field trips.